One year a baby, one year a mom

This entry is a couple months overdue. But we made it! At 14 months of age, Miles is not really a baby anymore. He’s not yet technically a toddler since he isn’t walking on his own, but he isn’t as squishy and vulnerable as he used to be. He’s an intrepid little explorer with a mind of his own. He’s growing taller and stronger and losing a tiny bit of baby chub. He has 8 front teeth on top and bottom and 2 upper molars are peeping through his gums. He can walk laps around the house if he holds our hands. He can walk around even just holding one hand. Any day now and he’s going to take those first steps unassisted, which I think about with pride and sadness. Everyday he’s a brand new Miles, and the Miles of yesterday is gone forever. I miss him even though I’m with him every morning, evening, Saturday and Sunday. 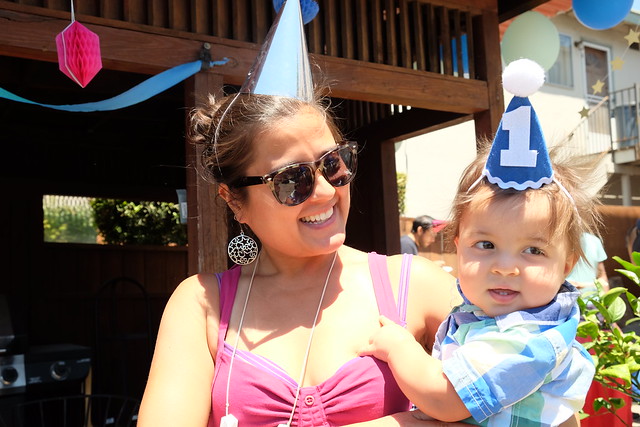 Miles sleeps pretty consistently 8pm to 6:30am. Rarely he’ll wake up and cry for a few minutes before settling himself back down. Only a few times have I felt it necessary to go in and comfort him. Because he sleeps consistently I can say that I’m getting 80-90% of the sleep as I got pre-baby. The difference is my schedule has moved earlier by an hour or two (especially on the weekends when I used to easily sleep in to 10 or 11am). Although I fantasize about being able to sleep in, on the few days this spring and summer that I’ve spent away from Miles, I wasn’t able to sleep in at all. My body is used to a very strict routine these days.

I’m less worried about him hurting himself. 6 months ago I would have been traumatized if Miles fell off the couch. Now, he’s much more sturdy and he himself doesn’t seem as bothered by the tumbles he takes every now and then. That’s not to say he doesn’t hurt himself. He gets bumps and bruises here and there and definitely gets upset, but it just doesn’t stress me out as much. He’s also a lot more fun to horse around with, bouncing and rolling around our bed, chasing him around on the floor, and tossing him in the air.

He loves to cuddle now and he consistently calls me mama or mommy. It’s so sweet, it just makes my heart melt. I wish he would cuddle for longer than a few seconds at a time though!

Miles has got a mind of his own (which is good) but it means that he never wants to sit still for diaper changes, for teeth brushings, for cleaning his hands and face after meals, for getting dressed… the list goes on. He’s on the go all the time and puts up a fight when I’m trying to. just. do. this. one. thing. Sometimes it’s really frustrating and I start to lose my temper, and other times I just have to laugh at how wily and wiggly my baby is.

He gets into everything. Since he can pull himself up to standing, anything that is 3 feet off the ground is within his reach. He loves pulling things out of drawers and opening and shutting cabinet doors over and over. Everyday after he goes to sleep we just pick everything back up and put it away, ready for the next day.

He’s gotten a lot more picky about what he eats! This is probably the most frustrating for me because I hate wasting food (that in itself isn’t good for my waistline). In my last post I talked about how he eats pretty much anything. Now he tends to only want to eat carbs, fruit and dairy. He’s not a fan of vegetables or meat unless it’s disguised in some way, and most of the time I don’t go out of my way to prepare him a special meal because his tastes change so often and anything I give him has a 50% chance of being thrown on the floor. Every mealtime is a little uncontrolled experiment where I might give him something new (like grilled chicken) along with a few things that I know he’ll eat (like tomatoes, plums or macaroni and cheese). Sometimes he surprises me and chows down on ground beef or roasted beets.

Miles has never been a big fan of riding in the car. Inevitably, in any car journey longer than 10 minutes there will be a period of time where he is howling his head off and really struggling to get out of his straps. If we time it right, he’ll eventually get tired enough to nap in his seat, but often I have to console him from the driver seat and it’s really not fun. Or safe.

And what about mom?

I’ve been working out at my local Planet Fitness pretty consistently 3 mornings a week after I drop Miles at daycare and before I start my work from home days. This usually consists of running for 25 minutes, doing some upper body weight machines, and 5-10 minutes of abs and stretching. I don’t push myself that hard, I just congratulate myself for even getting to the gym. I’m just way too tired to motivate myself any more than that. I think that’s ok for now.

Food is definitely the harder issue for me. I love eating. Dieting feels so soulless and punishing. Eating is one of the pleasures in life that is still available to me and it sucks having to feel like I need to deprive myself. I’ve looked into a couple different options to help me make better decisions about food. Lately I’m realizing as much as I love to cook, I really don’t enjoy cooking when Miles is screaming, hanging off of the baby gate wanting me to play with him. So we’ve been outsourcing that more and more to Munchery so I can actually spend more time with him in the evenings. They have healthy options as well as not so healthy, and it’s all usually pretty tasty. Taking it a step further, I just signed up for a service called BistroMD, it’s some weight-watchery thing that I’m a little skeptical about, and the food choices seem boring and soulless, but I’m going to try it for a week. After that, in October, I’m also thinking about trying a 30 day “cleanse” where I do some healthy shake for breakfast and then lunch and dinner are meals without a huge number of foods I love to eat (wheat gluten, dairy, processed foods, sugar, alcohol). This will be challenging because it means I’m going to have to prepare all my meals again (blah!) or find some way to outsource that again so I can keep my time with Miles.

As for my mental health, there are some weeks where I really struggle with my feelings of inadequacy as a mom and at my job. I always feel like I’m not doing as well as I could. I feel like to be the best mom I should be enriching Miles’ learning and actively trying to teach him things and taking him places. I do some, but I get tired or bored after a couple hours and I drift to my phone. At work I feel like I’m doing all I can to complete my assigned tasks and the time I used to spend learning beyond my assignments is now taken up with parenting so I feel like getting ahead is getting harder and harder. In the time that’s left over, I get overwhelmed thinking about all the stuff broken with our house that needs to be fixed or remodeled, and making decisions about our long-term future. Inevitably, maintaining my relationships with friends comes at the end of my list of priorities. I guess that’s what being an adult is. At least this description of adulthood matches with everything I was trying to avoid as a teenager and twenty-something and even early-thirty-something. Constant stress and learning how to manage it so you can build some happy memories in there somewhere. But without friends. And with massive amounts of anxiety. Ugh.

On the bright side, I’m definitely lucky to be able to work from home several days a week, otherwise I probably wouldn’t exercise, and our house would be in even worse shambles! Hooray!