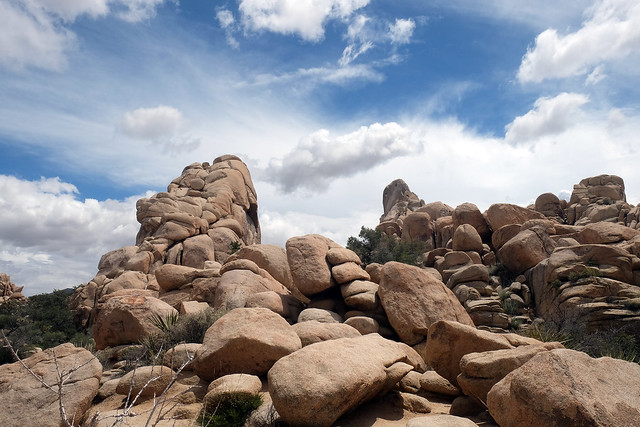 I knew I wanted to go on a modest vacation before my third trimester began in earnest. Between December, when we went on a weeklong trip to Maui (which I neglected to post about here because I was nauseated all day every day, but feel free to peruse my flickr album) and May, I hadn’t taken any days off from work and I was itching to go. Plus, the fact that in a few short months my life would irrevocably be changed and we’d never really be able to go on vacation with just the two of us again, made the decision to plan a trip that much easier. We decided on Palm Springs/Joshua Tree because it is close by and relatively cheap to get to.

The first couple nights we stayed in a quirky, quiet, laid back motel north of Joshua Tree National Park in the town of Twentynine Palms, called Harmony Motel. I chose it for its proximity to the park and wanting to be “away from it all”. Little did I know, U2 had a photoshoot, and possibly even stayed at Harmony Motel at some point. 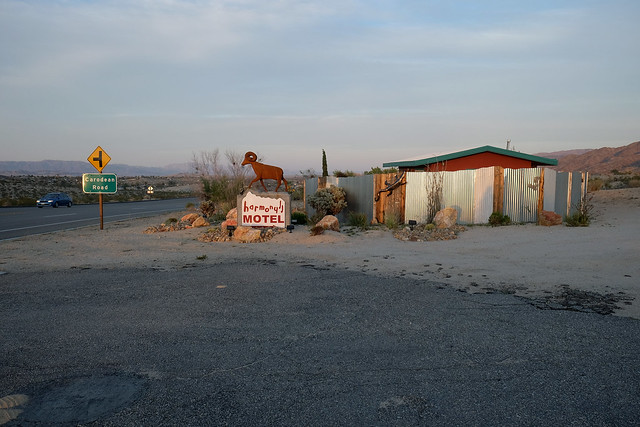 It served as a convenient place to take little forays into the park. With my husband having to work for part of the day and me being pregnant and unable to sustain high-energy activity for very long, it was nice to come back to the motel and nap or sit by the pool in between explorations.

The first hike we did was along the Fortynine Palms Oasis Trail (they sure like to count palm trees here). I was a little nervous that I wouldn’t be able to complete the 3 mile hike in the hot sun, but luckily it wasn’t too hot and I was able to take it very slowly. I drank plenty of water, and there was a nice oasis at the midpoint of the trail where we stopped to eat some snacks. There was a fair bit of elevation so we could see pretty far out into the desert, and the nearby military base. After months of not hiking, it felt really good to go out in nature and just look at all the plants and rocks and lizards. 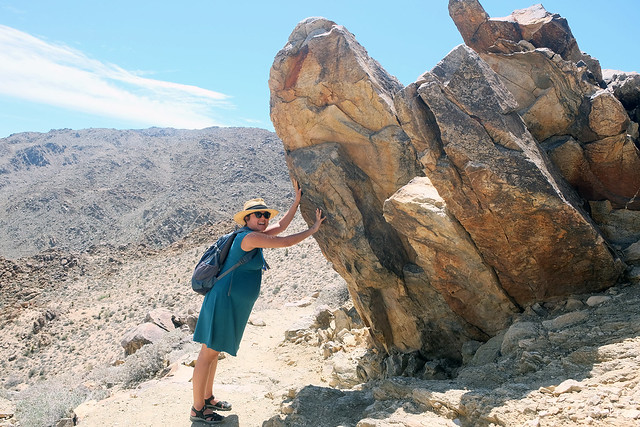 The oasis just appears out of nowhere amongst the rocks. 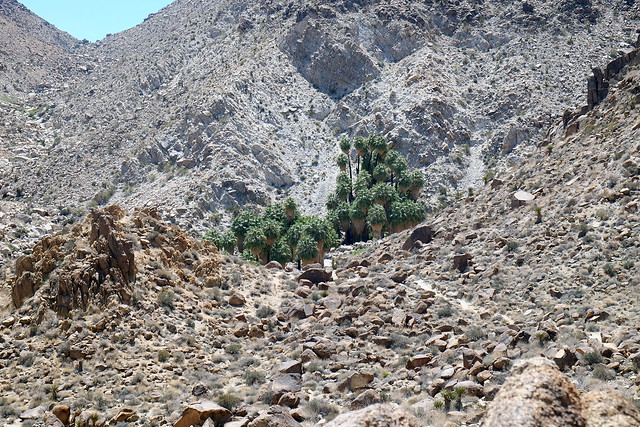 It wasn’t quite what I imagined. Although there is water there, there wasn’t very much that was visible. The palms provided some cool shade in which to rest and awesome contrast against the desert landscape. Apparently years ago some people camped there and accidentally set fire to the place so there were a couple signs telling people not to go amongst the palm trees, which was all too easy to ignore. I know, bad me. But I didn’t hike 1.5 miles at 28 weeks pregnant to just look at them from afar. 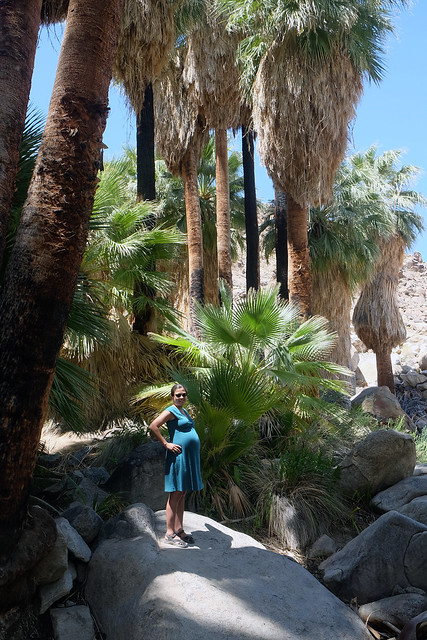 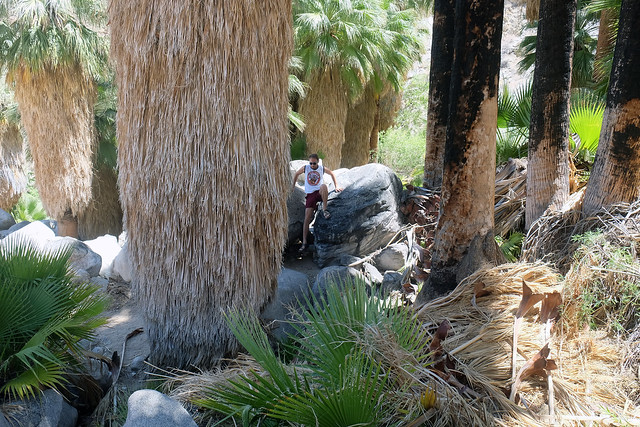 Later that evening we went on another outing to explore the area around Skull Rock. This was a completely different landscape of rounded rocks and a lot more flowering plants. 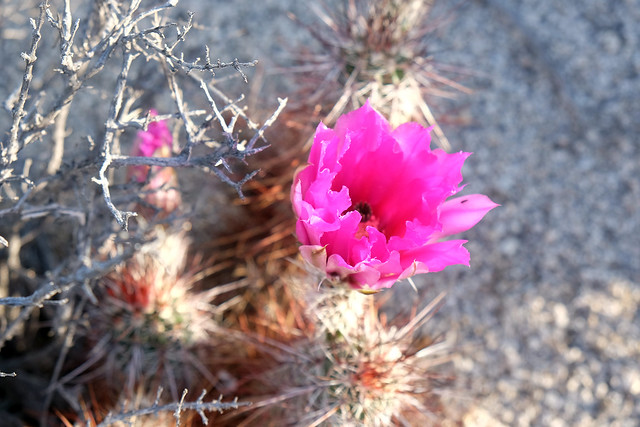 And there were actually some joshua trees. 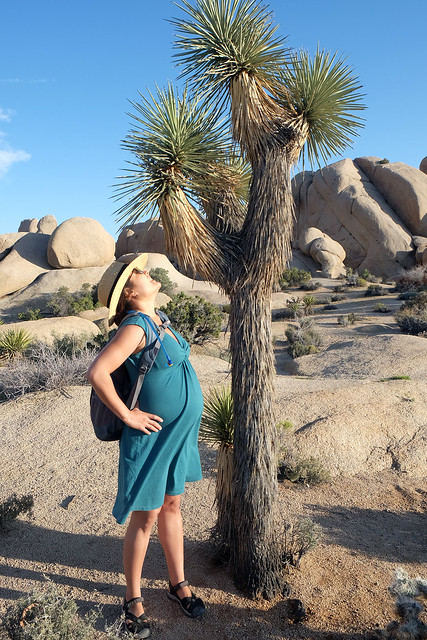 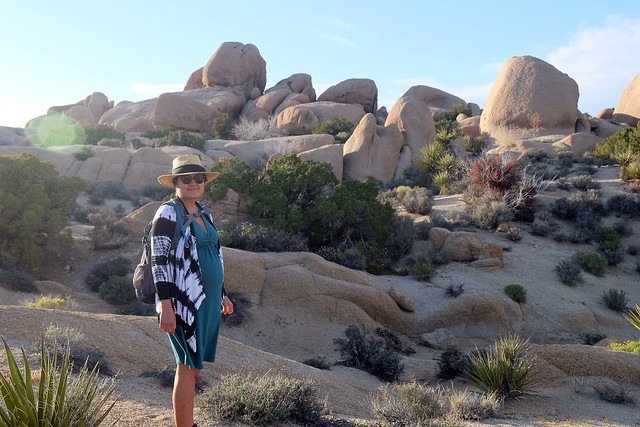 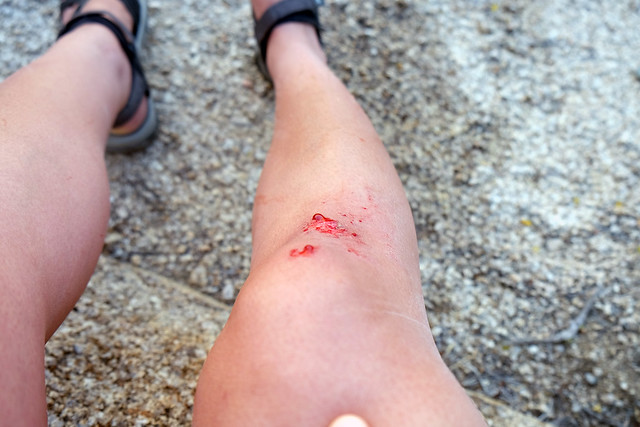 I fell down and did this to my knee. It hurt real bad. I might have screamed. 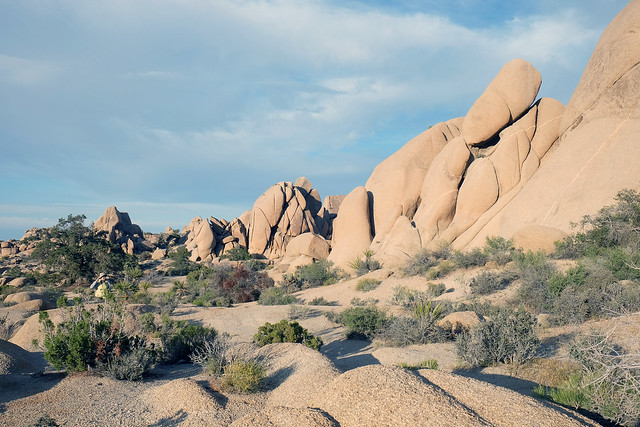 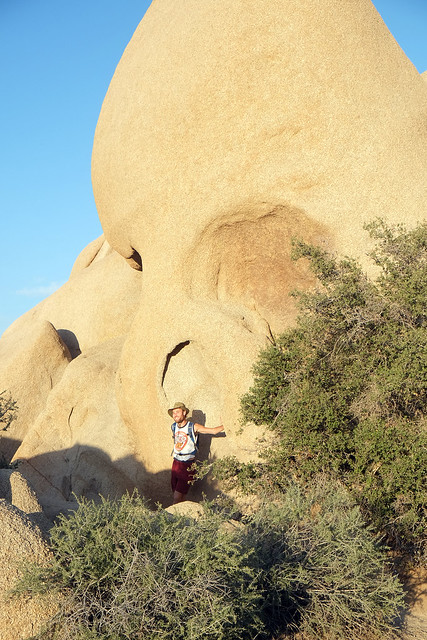 Bob in front of the aptly named “Skull Rock”. 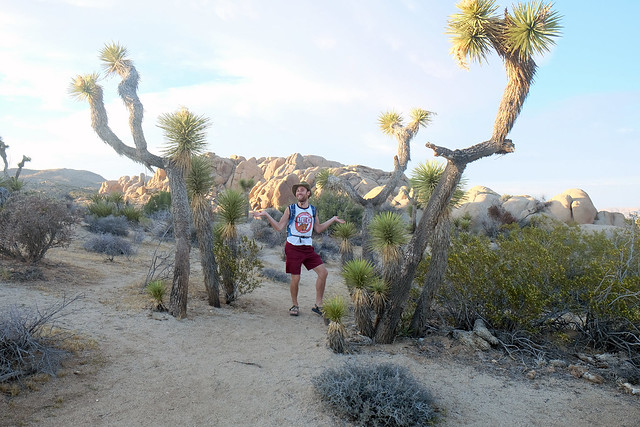 The next day we checked out another couple spots in the park before heading to Palm Springs. 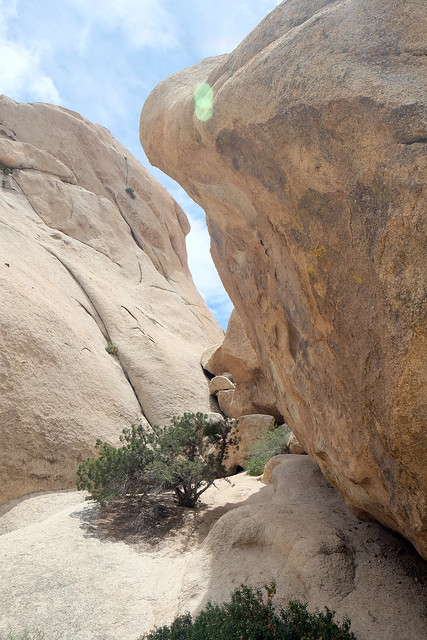 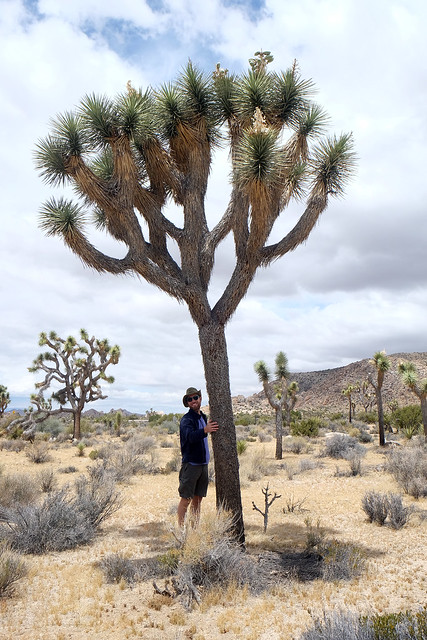 It constantly felt like we were on a movie set. 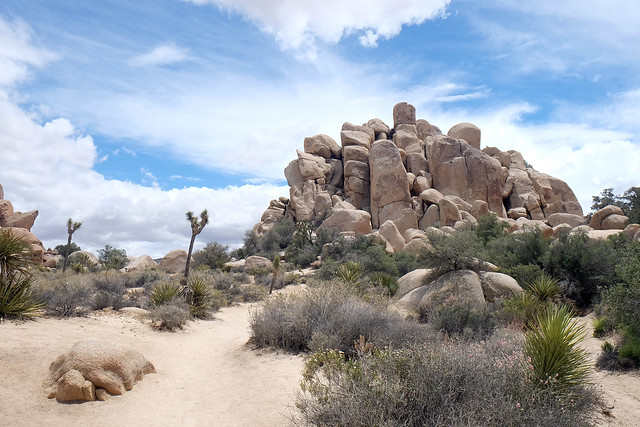 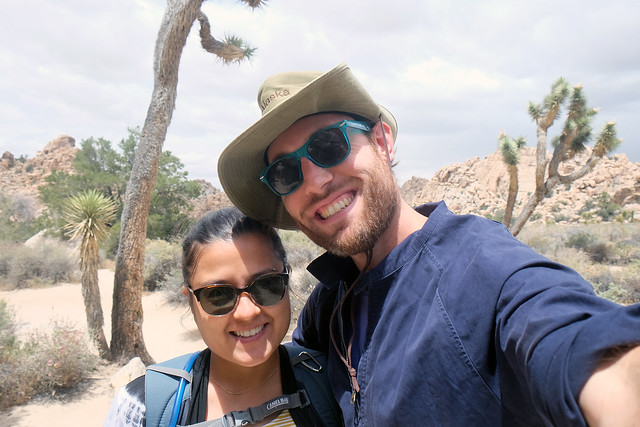 A selfie in Hidden Valley. 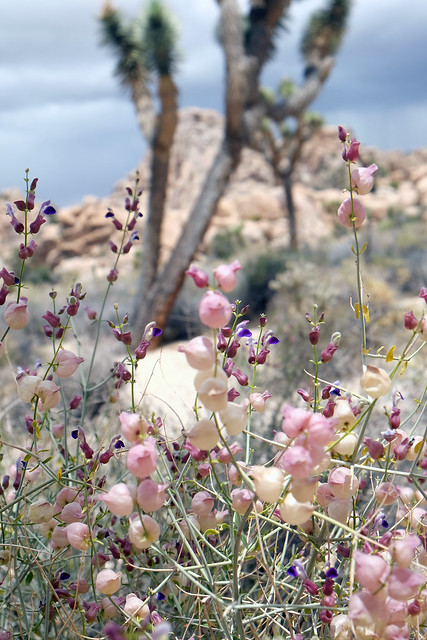 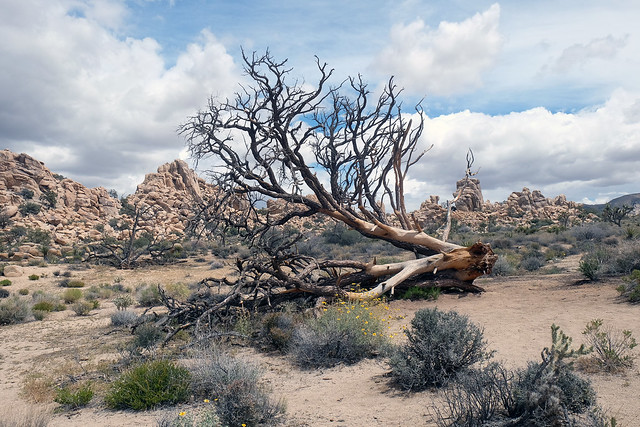 Everything just looked so dramatic.

Sadly, we had to leave the park before we were ready. I made a prenatal massage appointment at Grounded Bodyworks in Palm Springs that I had to make. Had I known better I would have stayed the whole time near the park rather than go to Palm Springs, but oh well. The massage was nice.

We stayed the next couple nights at the Hotel California. It’s the second Hotel California we’ve stayed at, (the first was in Todos Santos, Baja Mexico) and both were excellent (although unrelated to each other). The pool at the hotel was really nice and slightly heated, which was a nice touch. We didn’t do much in Palm Springs other than hang out by the pool, go out to eat a couple times, and visit a nearby botanical garden. 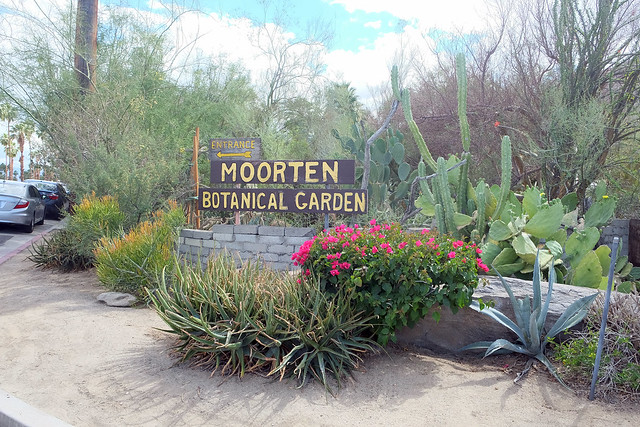 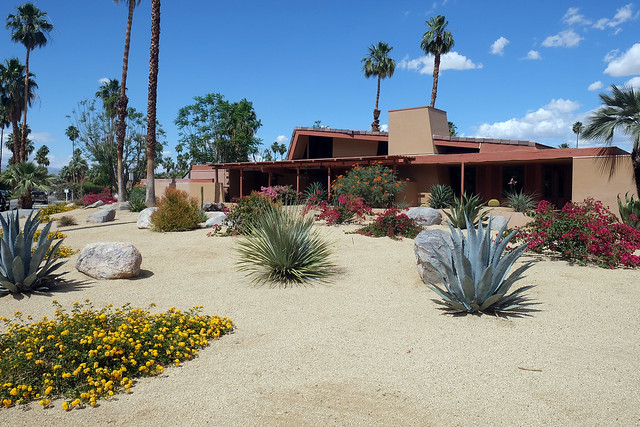 If you have a hankering for German-style pancakes, I recommend Elmer’s!

I definitely want to go back to Joshua Tree, and maybe even camp in the park. It’ll have to be with baby!